Today I’d like to write a bit about another Arduino project that was a direct result of the first Corona lockdown. The whole thing was cobbled together in a matter of a few hours using only spare parts that I had lying around at the time. Of course it took a few small iterations to smooth out the initial issues. 😉

Rewind to April 2020, the first lockdown had just started a few weeks before. We were locked at home, having to homeschool — or at least entertain — three children while also trying to work full-time from home. After a few weeks we were running out of ideas to keep them entertained. They had already finished a few basic Scratch projects and some basic woodworking. (Yes, woodworking 😁: a player-vs-player tabletop pinball machine. Maybe I’ll write something on that later.) I thought that it might be good to make something quite basic that would involve programming, woodworking and electronics. And what better appliance to make during a pandemic than an automatic soap dispenser.

Let’s start by showing the final result. The initial version had several key differences, or rather issues that we’ll come back to later. Here’s some pictures of the front and back side. 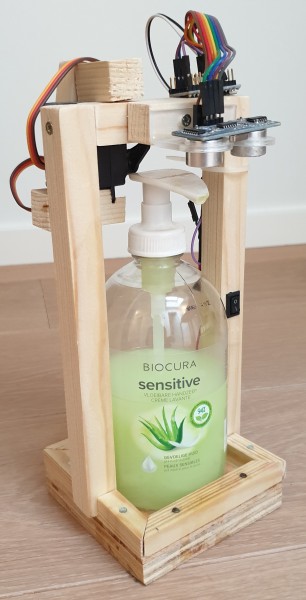 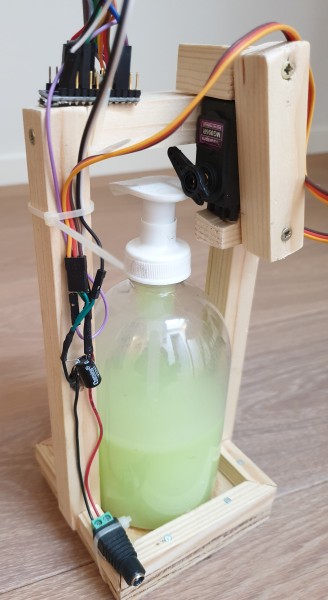 The wooden frame consists of a few parts, all of which were made to match the dimensions of the soap dispenser that we usually buy at our usual supermarket:

The servo frame is quite tricky as the servo can apply quite a (reaction) force to the rest of the frame. As you can probably see, the final solution is quite pragmatic and ugly. But at least this iteration doesn’t just snap off after a couple of pushes. 😀

Then there’s the electronics. I’ll just sum up the parts that I’ve used. The wiring is very straightforward (see comments in Arduino code below), so I won’t show a schematic here. Basically everything is connected to the Arduino, except the power and ground line to the servo.

This is the Bill of Materials:

The basic idea is that the distance sensors will check for an object (=hand) within a certain range, and, if so, the servo will push the lever of the soap dispenser. When the hand moves away, the servo releases the lever.

Here’s a close-up of how the two distance sensors are mounted. Make sure to align the sensors such that the beams do not hit the soap dispenser lever. 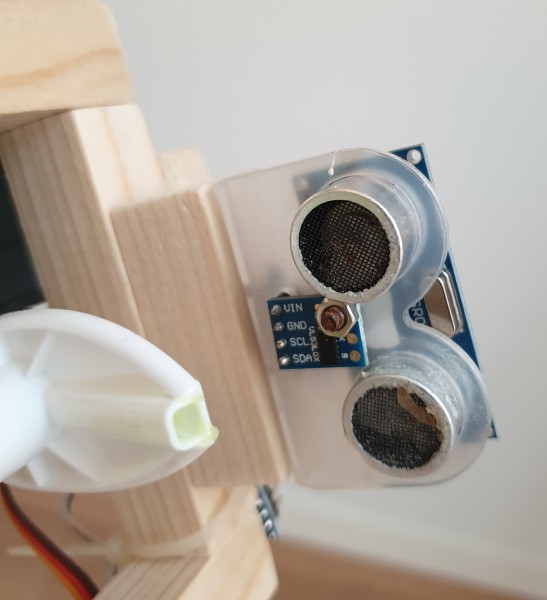 As mentioned before, the initial version was quite different to the result shown above. Here’s a list of a few things that went wrong and then got fixed.

That’s it. That’s all there is to this small hobby project.

In the end, the kids lost interest after they helped make the wooden frame, so I ended up doing most of the electronics myself. But I think they at least learned a few things along the way. And they definitely use this dispenser very extensively; and show it off to other people, boasting about how they made this themselves. 😉

Finally, here’s the Arduino code. The only dependencies are the Servo library, the NewPing library and the Adafruit VL53L0X library, which can be installed through the Arduino library manager.

I don't have comments on this site as they're difficult to manage and take up too much time. I'd rather concentrate on producing content than managing comments.