A Battery-Powered Tootbrush Timer for Children

After a few posts focused on how I set up this website, I want to write about something completely different this time.

I’ve been dabbling with Arduinos for quite a few years and I’ve made a sizeable amount of personal projects. However, I’m very lazy ☺️, so I’ve never properly documented any of them. So I want to get started now. Today’s post is about the most recent project: a battery-powered toothbrush timer for my kids.

The reason for making this is that my kids are brushing their teeth with normal toothbrushes but are always fighting and arguing about who has brushed long enough and who didn’t. So I decided to try and make a simple micro-controller-based timer that would end those heated arguments. 😉

The objective is to create a timer that starts when you press a button (or more buttons in case of more children). It should then run for a hardcoded preset time (e.g. 2 minutes) which is split up into four equal parts: for the top-left, top-right, bottom-left and bottom-right. Per button, the brushing time will be indicated by four blinking LEDs, which will come on consecutively after earch quarter of the time. The final requirement is that the whole thing should be able to run on one battery charge for at least a few months.

Let’s start by showing off the finished state of the project. 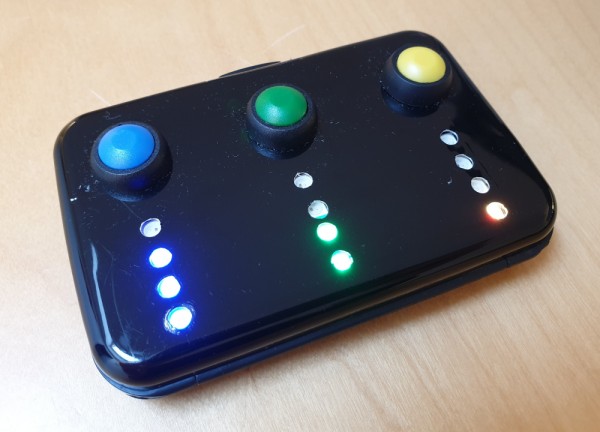 I think it came out pretty nice, especially given the fact that I don’t have professional tools. I only used a standard power drill and a Dremel. The only remaining thing I still want to do is to put a piece frosted plastic foil between the pixels and the inside of the case.

This is the Bill of Materials:

As casing, I used a business card case. I had picked up a handful of these a few years ago. I thought they could come in handy for small Arduino projects. The frame and the hinge of the case are actually made out of 2-3 millimeter thick plastic, with two metal shells on the outside. Originally, the case had accordion-like sections on the inside, which were easy to remove.

Next, I drilled the holes for the buttons and the individual LED pixels using a standard power drill. This was pretty tricky to do very precisely since the drill bit had the tendency to slide around on the smooth metal surface. After that, I milled out a strip of plastic behind each set of 4 holes such that the pieces of neopixel strip would fit nicely into those slots.

I decided to go for three distinctive button cap colours and matching LED colours. After that, wires were soldered to the buttons and the LED strip sections. Then the buttons, LEDs and battery case were mounted to the case. The result looks like this. 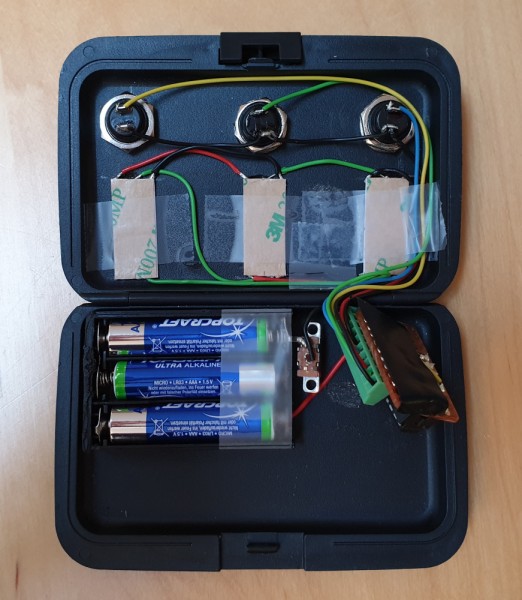 Note that this picture also shows the circuit board (wrapped in insulation tape to avoid short circuits) which we’ll focus on now.

Since the whole thing requires only a few in- and outputs and is supposed to be very low-power, I’ve gone for an ATTiny85 microcontroller. In deep sleep mode, this chip uses less power than the self-discharge rate of standard batteries, so it should be perfect for this project. Note that I’m using a bare microcontroller, not an ATTiny-based board. This is done on purpose because all those boards have voltage convertors on them which will draw a constant current, draining the batteries within a few hours or days.

In the past I’ve used KiCad to design PCBs for projects.
However in this case, it would be extremely expensive to design and order a custom PCB for this project. It makes more sense to use a piece of perfboard/veroboard for this. On the other hand, I have had a few bad experiences when not planning the wiring and layout beforehand. It’s not nice discovering that you made a stupid wiring-up mistake after spending an hour soldering everything together. So this time I wanted to make sure to have a nice wiring schedule done before I started soldering.

I could have used KiCad, but it would have taken a lot of time to have all the components clip to the perfboard grid and to plan out which strips should be cut and/or connected in which spots. Luckily, after some searching I found VeroRoute. This tool is like a simple version of KiCad, which automatically snaps to grid. Moreover, it combines the schematic and layout design into one step; which makes sense for very simple perfboard circuits.

The result is the following schematic/layout: 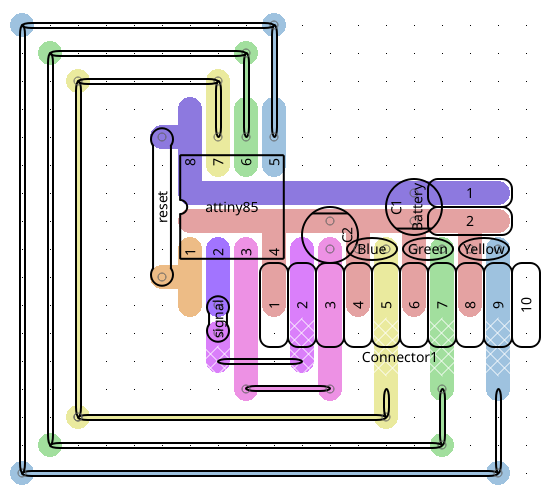 Before we move on, let’s do a very brief run-through of the circuit. Firstly, we’re going to connect the ATTiny directly to the battery, since using power conditioning circuits would drain the battery more than the actual microcontroller. However, to at least have some sort of power conditioning, we’ll put a 100µF cap across the battery plus and minus terminals (indicated by 1 and 2 in the middle right of the picture).

The three buttons are connected to pins 5, 6 and 7 of the ATTiny with a 100nF debouncing cap between the signal and ground lines for each.

The LED strip is a bit more complicated. Each of the pixels has a plus, minus and signal connection which are all series connected. Each of the pixels in the strip is actually a tiny microcontroller in its own. This is because the colour of the pixel is set by sending a particular code through the signal line, with each pixel identifying the relevant colour by a strict timing pattern. The main drawback, however, is that each of the pixels will keep drawing power, even when the LED is off. In order to overcome that, we’ve wired up the plus of the LED strip to pin 3 of the ATTiny85, such that we can completely switch off the power to the strip. Note that there’s an additional 100µF cap between the ground line and this pin in order to condition the voltage. This is needed because a neopixel strip can draw quite a lot of power at power-on. 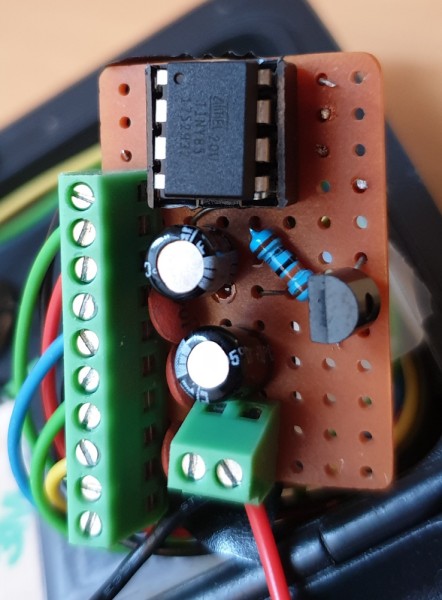 SIDE REMARK: Before I ended up connecting the power line of the LED strip directly to the ATTiny85, I was playing around with connecting it through a PMOS transistor. However, I ended up with latch-up-like problems because the FET was too ideal as a switch, leaving the LED power line floating. ☺️ After some measurements, it turned out that the strip was drawing significantly less current than the maximum that an ATTiny pin can handle. That’s why I decided to wire it up directly. NB: You can still see the unused transistor and resistor in the picture above.

The only thing left now is programming the ATTiny85. I’ve used the standard Arduino environment. You can find the full code at the bottom of this post. Let’s just go over the dependencies and a few of the interesting bits.

Next, the correct fuse settings should be flashed to the ATTiny85: we want to use the 8MHz internal oscillator and we also want to disable the brown-out detector (BOD). The fuse settings can be calculated using this tool. The fuse settings are stored in a settings file inside the Arduino dot-directory.

All there is left now is to edit the pre-compiler variables at the top of the code to configure pin connections, brush time etc., and that’s it!

So, finally, here is the full Arduino code. I might set up a GitHub repository for this in the future.

I don't have comments on this site as they're difficult to manage and take up too much time. I'd rather concentrate on producing content than managing comments.